This is a sample script for opening and closing Google Forms on time using Google Apps Script.

Here’s a handy little snippet if you would like to programmatically open/close one of your Google Forms to responses for specific hours of the day. The script includes another trigger that will repeat opening/closing the Google Form for responses each day. As this snippet uses .timeBased().at(date) it’s easy for you to modify if you want to only have the form open to responses between two specific dates/times.

Is it possible to integrate Google Workspace tools such as Calendar, Sheets, and Forms with Workflows? For example, can you trigger a workflow from a Google Form or a Sheet? Turns out, this is not only possible but also easier than you might think. Let me show you how with a sample use case.

One of the great things about Google Workspace is there is never ‘one’ solution, there is enough flexibility for you to implement one of many workflows. A case in point is this post highlighting a Google Forms/Sheets powered approval system for allocating virtual machines (VM) to your users. As part of this the workflow includes calling the Compute Engine API to create the VM in Google Cloud.

Not just talking the talk, but also walking the walk. Shortly before taking a new role at CTS, the largest dedicated Google Cloud Partner in Europe, I published Forms History an add-on to enable revision history functionality in Google Forms.

Fellow Google Developers Expert, Scott Donald, has picked this up in the latest episode of GWAOw! his dedicated to Google Workspace Add-on review show. You can follow the source link for the YouTube clip and more. As part of the episode Scott rightly highlights the creative work of Alice Keeler, which hasn’t just included artwork but Alice has also provided a huge amount of support in promo and usability.

If you are interested in the inner workings of Forms History there is a related post on Working with the Google Drive API Revisions history: Tips for handling revision merges with Google Apps Script.

I wanted to give a presentation to a group of people. In order to make the presentation more engaging & eliminate silences during the slideshow, I thought of conducting polls in between. … Since I am giving presentation using Google tools, I thought let’s try it out with Google Apps Script.

I thought this was a nice little Apps Script snippet from Prateek Sharma which hooks into a .onFormSubmit() trigger to update all charts embedded from Google Sheets in a Google Slides presentation. Prateek provides detailed steps including the code for setting this up. Unfortunately, a limitation of Google Slides is once you go into ‘slideshow’ mode all charts become static images so you need to jump back to the editor view to show real-time results.

Learn how to automatically preserve the formatting in Google Sheet when new Google Form responses are submitted.

Handy little Apps Script snippet from Amit Agarwal should you need to keep any custom formatting applied to linked Google Forms responses in Google Sheets. Another way you can approach this is using ARRAYFORMULA to reference the form responses in another sheet and apply your desired formatting.

The default ‘Form responses’ sheet can be hidden if needed. Downside of using ARRAYFORMULA is you are referencing a cell range which can cause confusion when using features like sort. See the source link for all the code used in Amit’s solution.

Google recently announced the general availability of the new Google Forms API. For developers familiar with Google Apps Script for some time it has been possible to create, access, and modify Google Forms through the Forms Service. In this post I will highlight why Google Apps Script developers might want to use the new Forms API and some resources I’ve found useful for working with the new API in Apps Script projects. As part of this I’d like to share my experience of using the Forms API within a Google Forms Add-on and some factors to consider if you are particularly interested in watching for Google Form edits.

The Google Forms REST API provides an alternative method for managing Google Forms and responses. For Apps Script developers it is likely you’ll want to stick with using the Forms Service, but the new API is useful to know about as it opens up some new ways for managing, editing and watching Google Forms.

Introducing the Google Forms API – Use cases and example applications

For the first time, Google Forms has an API and we are going to show you how you can use it and what’s in it. The new Google Forms API joins the large family of APIs available to developers under the Google Workspace Platform. The Forms API provides programmatic access for managing forms, acting on responses, and empowering developers to build powerful integrations on top of Forms.

Some additional resources to support the general availability of the Google Forms API have been published. This post includes information on the key use cases which are supported by the API:

Reaction to Form responses: The API also enables developers to build automations for acting on incoming responses. Examples include developing real-time dashboards or visualizations and triggering business workflows based on response data.

Given the existing widespread use of Google Forms in education it was nice for this to be acknowledged and also to see Automagical Forms getting mentioned.

Available to all Google Workspace customers, as well as legacy G Suite Basic and Business customers and users with personal Google Accounts

We’ve shared a couple of updates on the new Google Forms API previously here on Apps Script Pulse. The good news is the Forms API is now out of beta and available for testing and deployment. For Google Apps Script devs I’m sure you are thinking ‘but we can use the Forms Service?’ You can and likely in most instances to be the first port of call, but the new API brings some additional functionality not supported in Forms Service, in particular, a trigger when a Google Form is edited.

Google have provided an example of how the new Form API can be used in an Apps Script project with this Google Forms API Apps Script web app demo. Also as previously highlighted Christian Schalk is speaking at the Google Cloud Innovators Hive event March 29-30, 2022 and we are anticipating a session on the new Google Forms API.

In this post, we’re going to look at how we can work with the responses a form user submits.

To show some practical uses of this, we’ll do the following:

This post taken from Barrie Roberts’ latest book “Beginner’s Guide to Google Apps Script 2 – Forms“, available on Amazon here. The post covers some different ways that you can interact with Google Form responses and contains lots of useful code and tips that might be useful to other Google Apps Script developers.

This is the first of a three-part post, where we’re going to look at how you can create an appointment system using Google Forms and Sheets and with the use of Apps Script, how you it will update the available times on the forms and how it will send automate confirmation emails to those making the appointments. I’ve used this system for parents evening meetings, but it could be adapted for any area that need appointments.

This series of posts from Baz Roberts details an appointment booking system created in Google Sheets and Forms. There is a lot of details, tricks and tips across the post series so well worth spending the time to unpick what has been shared.

The Google Forms API is currently in Open Beta. For Google Apps Script users the new Forms API is worth keeping an eye on as it enables functionality not currently included in the native FormsApp service. In this post from Kanshi Tanaike an example is looked at where the Forms API is used to insert an image to a question. If you are interested in trying this example out remember that you currently need to apply for access at the Early Adopter Program page. 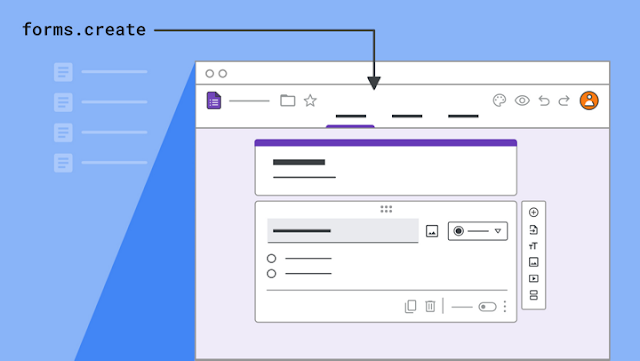 I decided to explore something similar to a Webhook for Google Forms. In other words, something that triggers another action when a Google form is submitted. In this case, when a Google form is filled and submitted, the results should be sent to an API endpoint for adding members to a database. I found an answer in Google Apps Script, a coding language based on Javascript which allows for programmatically extending Google Apps like Google Forms, Sheets, Docs etc.

A nice explanation of how triggers can be used in Google Forms to push new data to other systems. The post is easy to read and includes lots of screenshots to help prevent you getting lost.

In this post, we’re going to look at a simple issues reporting system, where the teacher fills out a Google Form to report the issue. This is stored in a Google Sheet, and an email with the summary of the issue is either sent to the maintenance person or IT technician, depending on the type of issue.

This is based on a system I introduced at the academy where I work, which is in Spain but not all the teachers speak Spanish, so the form allows them to report the issue in English and then it’s translated into Spanish for the relevant person to resolve the issue.

In this post Baz Roberts highlights the benefits of Google Apps Script Language Service to translate Google Form responses into another language.