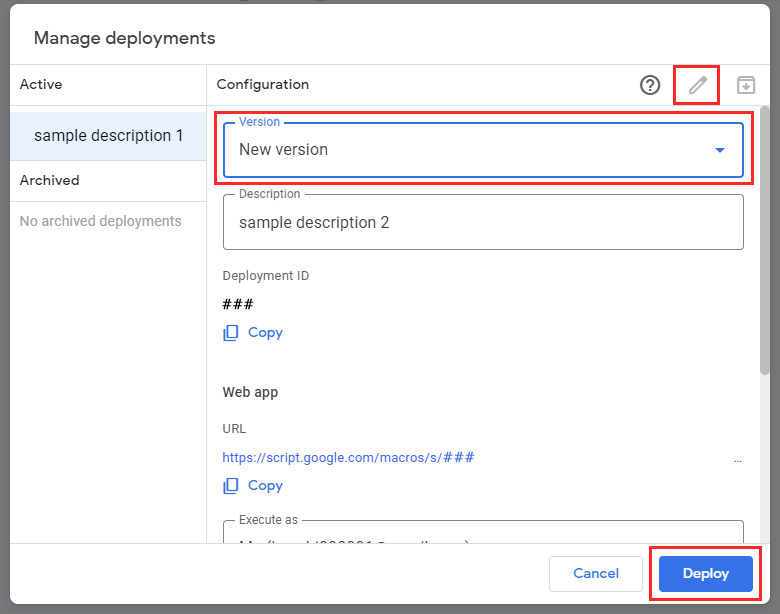 A ‘feature’ of the new Google Apps Script editor is managing your script project the deployments. A issue some developers are encountering when updating the published version of their web app is the published url changes. In this gist Kanshi Tanaike describes the problem and highlights how developers can update their published Web App without changing the URL.

Recently I came across a nice post from Ravgeet Dhillon, which looked at how to Add Unsubscribe link in emails using Google Apps Script. The solution uses a Google Sheet and a Google Apps Script web app to add an unsubscribe link to emails. As I noted when shared via AppsScriptPulse this is a useful addition if your mailing needs comply with PECR or similar electronic communications regulation compliance.

Having recently updated my ‘Create a mail merge using Gmail and Google Sheets’ in the Google Workspace Solution Gallery to handle inline images I thought it would be useful to show how this example can be extended to include a variation on Ravgeet’s post.

With Google Drive, Apps Script, Bootstrap, and a little jQuery, you can develop an Image Library web application with search and download functionality!

Useful little tutorial if you are interested in learning how to interact with Google Drive files. The post is also a nice introduction into using the Bootstrap framework for building responsive web apps.

This post shows how to setup Libraries in Google Apps Scripts to share code and functions. We will use this while using Slack for logging.

Nice post from Matt “Rudy” Benton on using libraries in your Apps Script projects to make it easier to share code/credentials. Matt illustrates this with a Slack app that has also been documented.

Source: Google Apps Scripts Libraries — How to set them up and turn Slack into a real-time logging platform

Finally the oauth app has been verified by Google 🎉, you can now start to use the GasHub(Google Apps Script GitHub Assistant) with new editor now!https://t.co/sYZIUybLH9

GasHub is a popular open source Chrome extension which lets you use GitHub for your code version control. This solution is the creation of @terryleonhart and not an official Google solution and as such there was some backend work to get the tool to work with the new Apps Script editor. This work has now been completed and developers can continue to enjoy using this excellent tool. To install and find out more click through the source link:

The new editor (Integrated Development Environment — IDE) for Google Apps Script is out! There is a lot of features in the new editor to make your lives easier; here’s my top 5 favorites that I think are helpful for beginners to write and manage their scripts.

We’ve reshared a number of community contributions about the new Apps Script IDE, but this is the first we’ve seen that is specifically targeted at beginners. As well as useful functionality within the IDE Cleo also shares some of her tips which should help writing code easier.

A week ago Google announced the availability of an improved code editor for Google Apps Script. … In this article, I’ll focus on the changes related to Versions and Deployments in Apps Script.

Post from Romain Vialard unpicking deployments with the new Apps Script IDE. Romain highlights lots of very useful tips and things to be aware of when deploying Apps Script projects, in particular:

For existing scripts, deploying from the new IDE will create a new deployment with a different url for your web app

Google Apps Script has a new editor, which is better, nicer, and completed ready for future new features. Today, I would like to introduce you to several dirty and secret tricks, what you can do.

If you like a keyboard shortcut you’ll love this post from Ivan Kutil! For those less keen on keyboard commands there is still plenty of other productivity tips from Ivan shared in this post.

Get ready to up your Apps Script! – Google Developers Blog

The new Apps Script IDE features the same rich integration with Google Workspace as it did before, allowing you to get started building solutions without having to install or configure anything. If you are working on a standalone script project application, you can use the Apps Script Dashboard to launch your project directly, or if you are working on a container bound project in Sheets, Slides or Docs, you can do so from selecting Tools > Script editor from their top menus.

Charles Maxson, Developer Advocate Google Cloud, has highlighted some features Google Apps Script developers new and old should keep an eye out for. I think one of the big ones for experienced Apps Script developers who work mostly in the online editor is going to be the context menu options and the Command Palette. Find out more in the source post.

Source: Get ready to up your Apps Script! – Google Developers Blog

Building and maintaining code can be hard. There are multiple phases in the livecycle of the code, each phase with its own challenges. Being able to easily retrieve information about the execution of your code in each phase is key. This is where the new Google Apps Script IDE debugging and logging features can help. In this article I will show you what you can do with the new debugging and logging features.

Some great tips from Jasper Duizendstra on using the logging and debugging features of the new Apps Script IDE.

Source: How to get the most out of the new Google Apps Script debugger & logging