Today we announced our 2022 Recommended for Google Workspace apps. This program offers a distinct way for third-party developers to better reach Google Workspace users and attract new customers to their apps. So, for those developers who may be interested in it in the future, we wanted to walk through the basics of what the program is and how to apply for it.

Back in June 2021 Google announced they were restarting the “Recommended for Google Workspace” program. Partners who applied to this program were required to demonstrate “the quality of their solution, their strategic investment in Google Workspace integrations, and security and privacy posture”.

In Google Chat, Spaces serve as a central place for team collaboration—instead of starting an email chain or scheduling a meeting, teams can move conversations and collaboration into a space, giving everybody the ability to stay connected, reference team or project info and revisit work asynchronously.

We are pleased to announce that you can programmatically create new Spaces and add members on behalf of users, through the Google Workspace Developer Preview Program via the Google Chat API.

Besides the new ability to programmatically create and populate Google Chat spaces outlined in the source post, if you are a member of the Google Cloud Partner Advantage program you may want to apply for the new Google Workspace Developer Preview Program. This program will give you access to this new Chat API functionality and other Google Workspace Developer preview developments.

Not a Cloud Partner Advantage member? You can apply to join

If you are interested in building on the Google Chat platform there is the What’s new in the world of Google Chat apps session at Google I/O (this session will be available on-demand from 12 May 2022).

Getting started is the hardest part: Find inspiration with new Apps Script samples

Google Apps Script is a hosted JavaScript development environment that makes it easy for anyone to build custom business solutions across several Google products. Figuring out where to begin can be a hurdle for such an expansive tool, so we’ve recently released 10 new inspirational sample solutions to help you get started. These additions bolster the Apps Script documentation, which now hosts more than 30 sample solutions.

Here are a few use cases our newest sample solutions address:

In 2021, we remained committed to staying connected, no matter what. We’re proud to share that #GoogleWorkspace productivity and collaboration tools were used by over 3B people globally, including 170M students and teachers. Learn more at https://t.co/wKmJqf6MNM #GrowWithGoogle pic.twitter.com/ZHAa4HDnGQ

With 3B people globally using Google Workspace there is an opportunity to grow the Workspace developer community and to help users get started Google have recently published 10 new sample solutions. The samples cover a range of coding skills and even experts should take a look as there are some great examples that can help with developing add-ons, Google Chat apps and more.

Source: Getting started is the hardest part: Find inspiration with Apps Script samples

This week, we launched the Apps Script connector for AppSheet, which now makes it possible to call Apps Script code functions from a no-code AppSheet app. This greatly extends the abilities of AppSheet apps by letting them access the power that Apps Script provides. For example, an AppSheet app can now use Apps Script to automate workflows with Google Workspace using the Workspace APIs for Drive, Docs, Sheets, and Admin SDK, and more – as well as other Google services like YouTube, Google Analytics, and BigQuery.

We’ve previously highlighted the Calling Google Apps Script from an automation in #AppSheet, which at the time of writing was a preview feature. This feature has now been announced as being generally available to AppSheet users.

If you are already familiar with this new feature you may find it useful to read the full announcement as it contextualises this feature within the ‘no-code’ / low-code marketplace and the benefits of integration with Google Workplace, Workplace APIs and other opportunities through Google Apps Script.

Introducing the Google Forms API – Use cases and example applications

For the first time, Google Forms has an API and we are going to show you how you can use it and what’s in it. The new Google Forms API joins the large family of APIs available to developers under the Google Workspace Platform. The Forms API provides programmatic access for managing forms, acting on responses, and empowering developers to build powerful integrations on top of Forms.

Some additional resources to support the general availability of the Google Forms API have been published. This post includes information on the key use cases which are supported by the API:

Reaction to Form responses: The API also enables developers to build automations for acting on incoming responses. Examples include developing real-time dashboards or visualizations and triggering business workflows based on response data.

Given the existing widespread use of Google Forms in education it was nice for this to be acknowledged and also to see Automagical Forms getting mentioned.

There were a number of announcements for Google Workspace developers in 2021 and in this post Charles Maxson provides a summary of the key points. 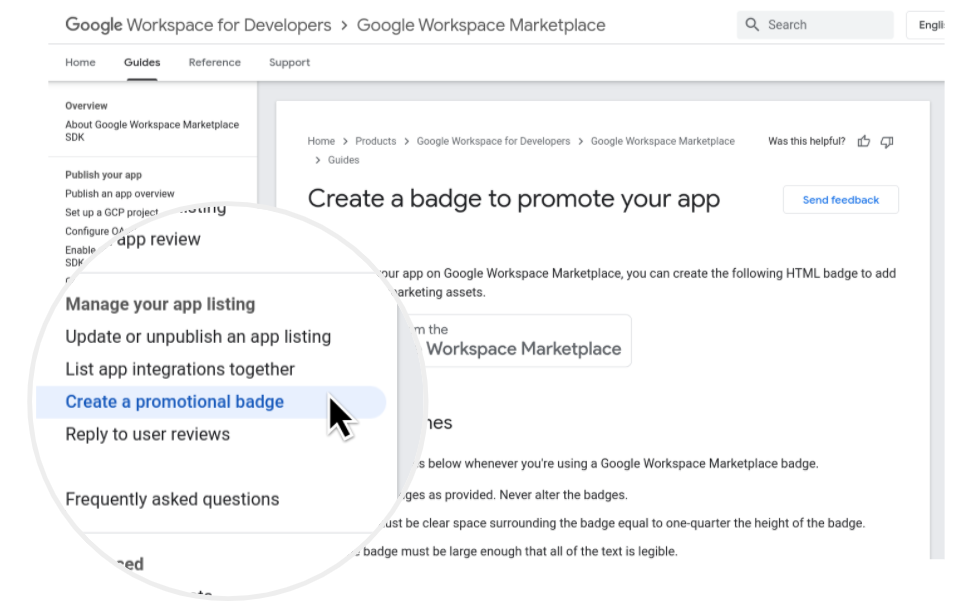 The post from Google contains more information about the benefits of using a promotional badge and how to get on for your Google Workspace Marketplace add-ons.

Source: Promote your Google Workspace Marketplace apps with the new badge for developers

Google is proud to announce the Google Forms API! The Forms API is currently available in Restricted Beta, with Open Beta expected to follow in Q4. … The new Google Forms API provides programmatic access for managing forms and acting on responses, empowering developers to build powerful integrations on top of Forms.

The Forms API is currently in Restricted Beta. We encourage you to apply here to be an early adopter to get started with the API today! We’ll also send you important updates about Open Beta and improvements to the API. To keep up to date with all the APIs of your favorite Google Apps, please subscribe to the Google Workspace Developer Newsletter.

On Totally Unscripted we were delighted to have Christian Schalk (Developer Advocate, Google) and Hannah Pho (Software Engineer, Google) as well as early Forms API partners Charles Kemp (Strategic Alliances Manager, Zapier) and Charles Wiles (CEO, Zzish), talk about the new Forms API. A recording of the show is on YouTube and show notes will soon be added to the Totally Unscripted website.

Developers worldwide are creating open-source tools and tutorials; however, they have difficulty getting them discovered. The content published often spanned on many different sites—from GitHub to Medium. Therefore Google decided to create a space where the best projects related to Google technologies can be highlighted in one place—introducing the Dev Library, a curated archive of projects and articles built specifically using Google technologies.

For Google Apps Script community contributors here’s an opportunity to submit some of your work to be showcased in Google’s new Dev Library:

Not all the articles or projects submitted by you, get on the site! A team of Google experts look for accuracy and relevancy in each featured piece, so you know when you view the content on the site, it has the stamp of approval from Google.

Next ‘21: Must-see Google Workspace sessions for developers and creators #GoogleCloudNext

At Next ‘21 we have 7 sessions you won’t want to miss that cover the breadth of the platform. From no-code and low-code solutions to content for developers looking to publish in the Google Workspace Marketplace and reach the more than 3 billion users in Workspace, Next ‘21 has something for everyone.

Click through to the source to read more about the must-see Google Workspace sessions for developers and creators.

Source: Next ‘21: Must-see Google Workspace sessions for developers and creators