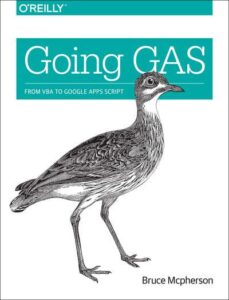 It’s been over 5 years since my book ‘Going Gas‘ was published, and Apps Script evolution means that a number of sections of it is now pretty out of date. I don’t think I have the energy to do a rewrite – so I’m going to do a critique, chapter by chapter, of where it’s now wrong as a way to show how much Apps Script has improved (or otherewise) over the years.

We recently highlighted how you could preview excerpts from Bruce Mcpherson’s ‘Going GAS’ book. Bruce has now followed up by using the book contents from 2016 to highlight differences in the current version of Google Apps Script.